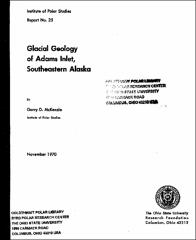 Institute of Polar Studies Report No. 25

Adams Inlet is in the rolling and rugged Chilkat-Baranof Mountains in the eastern part of Glacier Bay National Monument, Alaska. Rapid deglaciation of the area in the first half of the twentieth century has exposed thick sections of post-Hypsithermal deposits and some of the oldest unconsolidated deposits in Glacier Bay. About 30 percent of the area is underlain by unconsolidated material; 14 percent of the area is still covered with ice. The formations present in Adams Inlet are, from the oldest to the youngest: Granite Canyon till, Forest Creek glaciomarine sediments, Van Horn Formation (lower gravel member), Adams lacustrine-till complex, Berg gravel and sand, Glacier Bay drift, and Seal River gravel. No evidence of an early post Wisconsin ice advance, indicated by the Muir Formation in nearby Muir Inlet, is present in Adams Inlet. Following deposition of the late Wisconsin Granite Canyon till, the Forest Creek glaciomarine sediments were laid down in water 2 to 20 m deep; they now occur as much as 30 m above present sea level. A volcanic ash unit within these sediments may have been derived from Mt. Edgecumbe. Wood at the top of this formation is dated at 10,940 ± 155 years B.P. (I-2395). Gravel infilling (lower member of the Van Horn Formation) of the valleys tributary to Adams Inlet apparently followed retreat of the sea, although there are no deposits in Adams Inlet dated between about 10,000 and 4,000 years B.P. By 3,700 B.P. these gravels had reached 3 m above present sea level in the vicinity of Adams Inlet. About 7,000 years ago gravel was being deposited near present sea level in Muir Inlet, and several episodes of lakes occurred in Muir Inlet between 4,500 and 2,200 years B.P. Advancing ice in Glacier Bay had probably reached Reid Inlet by 4,680 ± 160 years B.P. (Y-9), and in upper Muir Inlet ice deposited till over wood about 2,120 ± 115 years B.P. (I-1610). Damming of the entrance to Adams Inlet, probably originally by outwash and later by ice from Glacier Bay, resulted in the formation of glacial Lake Adams about 1,700 B.P. The ice-dam hypothesis is supported by a date of 1,540 ± 130 years (Y-4) on wood under till on the south side of Geikie Inlet. Bottom deposits (Adams Formation) of Lake Adams were disturbed by several advances of ice from north of Adams Inlet into tributary valleys to the south. Retreat of the ice, possibly during the Little Optimum (1150-1300 A.D.), to the central part of Adams Inlet was followed by outwash filling (Berg Formation) of the valleys south of Adams Inlet. The late Neoglacial advance formed a kame moraine at Endicott Lake where ice remained until about 1830. Several glacial lakes formed in tributary valleys during deglaciation. Lacustrine deposits of these lakes, and glaciofluvial deposits and tills constitute the Glacier Bay Formation in Adams Inlet. The surface elevation of the ice in Adams Inlet in 1890 was 380 m, about half of the elevation during the Neoglacial maximum. By 1941, about l5 km2 of ice remained in Adams Inlet; this ice was less than 100 m in elevation. During this period the rate of wastage had been 7.9 m per year. Ice-contact deposits such as eskers, kames, and pitted outwash are common; buried ice is still present in parts of Adams Inlet. Outwash deltas are rapidly building into Adams Inlet.