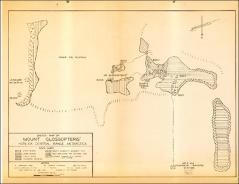 Preliminary Report of the Geology of the Central Range of the Horlick Mountains, Antarctica

During a reconnaissance flight over the route of the Byrd Station 1958-59 over-snow traverse which was to pass along the front of the Horlick Range, the sedimentary aspect and structure of the mountains was noted. Plans were made to include a visit to this portion of the range during the course of the traverse. The party of six in three Sno-Cats left Byrd Station on November 1, 1958, to make seismological, glaciological, and geological investigations of the ice cap. When the course of travel reached the appropriate position for easy access to the mountains, the vehicles were turned toward the rock and driven to within three miles of the snow-rock junction. Surface roughness at this point broke the crevasse detector boom and the Horlick Mountain camp was established. On 6 December 1958 four members of the traverse party set out to make a geological investigation of the rocks that formed the mountains. The party consisted of Dr. Charles Bentley (traverse leader), Jack Long, Fred Darling and William E. Long. The party climbed 4,000 feet to the summit of one peak making collections and measurements of altitudes and elevations. Nineteen hours after leaving the camp the last of the group returned to the camp. The stratigraphic section described in the report is located in the central group of the Horlick Mountains. This group of mountains is about 20 miles long and 5 to 10 miles wide. The northern limit of the range is sharply marked by an escarpment that forms impressive cliffs and an almost continuous front. The southern limit of the mountain group is not so well defined because of the higher ice cap surface to the south and the southerly dip of the mountain blocks. The eastern and western ends of the mountains are quite sharp suggesting transverse faulting to the perpendicular to the major escarpment.

Submitted by Richard P. Goldthwait to the U.S. National Committee for the IGY, National Academy of Sciences in partial fulfillment of IGY Project No. 4.10, NSF Grant No. Y/4.10/285.