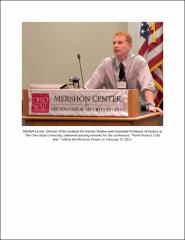 Perhaps no country in the modern era has perplexed Western observers as much as North Korea, a nation whose extraordinary secrecy and internal repression has generally prevented scholars from exploring its Cold War experience. As a result, the country remains to many an enigma, a land of provocation and intrigue that is often criticized but rarely understood. Then came the liquidation of the Soviet empire, and with it a torrent of new information from the archives of North Korea's former communist allies. Records from the embassies of Russia, East Germany, Poland, Romania, Albania, Hungary, and elsewhere, pulled back the curtain of secrecy that had long enshrouded North Korea, and for the first time allowed outsiders to begin to understand the policies of the "Hermit Kingdom." By utilizing these materials, this conference will examine the inner workings and foreign relations of North Korea during the Cold War, and in doing so will open a virtually unparalleled window into the nation's use of force and diplomacy during the Cold War and beyond.