Egypt and the Arab Spring Revolution 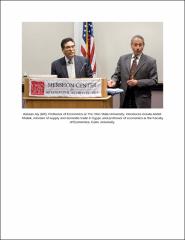 The Arab people revolted against unjust economic models that have left the vast majority of society destitute and marginalized in their own countries. For decades, inappropriate policies were prescribed and imposed by the very same international actors that are called upon today to facilitate the transition. The main questions to be addressed are:What are the main factors causing revolutions in the Arab world? What packages are on offer from G8, EU, IMF, World Bank and EBRD? How are these packages structured and targeted? What sectors will benefit? And what are the constraints? How much of a problem is inequality? Will concerns about social justice seriously be addressed? Why did Egypt new government initially turn down IMF and World Bank offers of policy support packages? The Arab Spring Revolution is facing three main challenges: Restoring Security: The lack of security is the first complaint of the Egyptians at present; they don't feel safe in the streets, at home, at work, etc. Lack of security has been also reflected in traffic chaos, which forms another source for public complaints. There are several factors which have lead to this result and which need to be tackled strictly. Although the security is relatively better at present as compared to eight months ago, when the youth revolution started, there are still much to be done to achieve an overall security in the country. Having a Comprehensive Economic View: The government lacks an economic view that targets raising growth and creating employment opportunities. The problem with the government is that each minister is dealing on his own with the problems and challenges in his ministry, which are many, without having an economic view for all the ministries to revolve the production wheel again, with all what this implies of raising production and creating employment. To achieve that, the government needs to have a think tank (as a high profile institute, or a group of well chosen experts), that puts alternative scenarios for an overall economic plan in which all the ministries have an assigned role to play, and also identifying the policies which enhance the private sector's role in investment and production within the market economy system adopted in Egypt. Establishing Democracy: The question is how to achieve democracy, with all what it involves of having multiple competitive political parties and a respectable election rules for choosing the president with limited powers by law. Changing the previous system which has been prevailing for almost 60 years (after the 1952 revolution), and which consists of one dominant party that formulates consistently the government is not an easy task. Even when Sadat, followed by Mubarak, allowed the existence of more than one political party, there continued to be one dominant party headed by the president and has always formed the government. One important factor for achieving democracy is that all those parties are competitive in power and have equal chance to formulate the government.