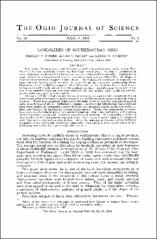 The Upper Pennsylvanian and Permian cyclothemic sedimentary rocks of the Ohio River valley are especially subject to downslope movements. Repairs of landslides on state highways in eastern Ohio alone cost over a million dollars annually. Eighty-seven slope failures were located within seven counties of southeastern Ohio; 50 of the larger of these movements were mapped in some detail. Earthflows and rotational slumps are the most common types of slope failures, the latter being the larger and constituting about 89 percent of the landslides mapped. Over 70 percent of the total number of slope movements occur within only one-sixth of the geologic column. Red shales predominate in the four most unstable intervals; the gray shales of the area seldom yield to sliding and the green shales vary greatly in strengths. Almost all of the red shales and one-third of the green shales slake completely within three hours after immersion in water; many of the red shales deteriorate to an ooze within minutes. There is no apparent relationship between stability and the amounts of soluble salts in each type of shale. Differential thermal analyses and rehydration tests indicate that these shales are composed largely of illitic clay minerals which, in the red shales at least, are deficient in bonding by cations of potassium. Ferric ions, presumably connate, have prevented readsorption of potassium throughout time, thus permitting a thickening of the interlayer water with resultant weakening of bonding. When interlayer water is driven off, a faster and greater regain is noted in the more unstable shales, as compared with that in the relatively stable shales. When the unstable shales are replenished with potassium, they strengthen markedly, especially those samples from which much of the inhibiting iron oxides have previously been removed.