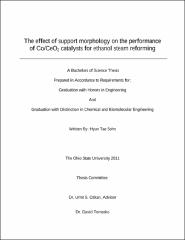 Hydrogen is considered a major candidate for future energy carriers. However, the typical methods of producing hydrogen such as gasoline and natural gas reforming are not environmentally clean. Bio Ethanol steam reforming (BESR) which is a carbon-emission free process shows potential for production of hydrogen. Cobalt based catalysts have shown promising BESR activity and are economically viable alternatives to the traditional noble metal based (Ni, Rh, Pt). Cerium oxide based supports are shown to have higher oxygen mobility which enhances catalyst activity. A more detailed research of the different morphologies of CeO2 nanocrystals such as polyhedra, rods and cubes can improve our understanding of the effect of support morphology on BESR. Therefore, in this paper the catalytic performance of cobalt catalysts supported on CeO2 in different morphologies was investigated for production of hydrogen via BESR. The cobalt-based catalysts were synthesized by precipitation and hydrothermal method and prepared by incipient wetness impregnation (IWI). Those catalysts were characterized through various techniques such as transmission electron microscopy (TEM), Brunauer-Emmett-Teller (BET) surface area measurements as well as steady-state activity testing on catalyst performance with a gas chromatograph (GC). With the current data provided by the GC, Co/CeO2 nanocubes showed the best catalytic performance at high temperature (450, 500 °C), indicating the highest hydrogen yield of 96 % and 100% ethanol conversion at 500 °C. Also, Co/CeO2 nanopolyhedra were the most active catalysts at low temperature (350, 400 °C), having the highest hydrogen yield of 87.5% and 93.5% ethanol conversion at 400 °C. Therefore, it is concluded that the effects of different actives sites and crystal planes of support morphologies play a role in improving the catalytic performance of Co/CeO2 for BESR.