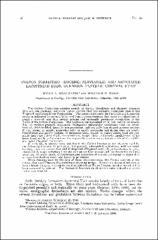 The Colton Formation consists mostly of fluvial (floodplain and channel) deposits that are less resistant and more highly colored than the adjacent lacustrine beds of the Flagstaff and Green River Formations. The contrast between the fluviatile and lacustrine strata is indicated by several lithic and faunal characteristics that occur in a short stratigraphic interval, and that permit precise and regionally persistent recognition of the limits of the Colton Formation. The Colton is distinguished by: 1) red, yellow, or brown, fine- to medium-grained, micaceous, feldspathic subangular sandstones that are crossbedded, thick-bedded, laterally non-persistent, and typically lens-shaped in cross-section; 2) red, green, or purple, somewhat silty or sandy mudrocks and shales that are poorly fossiliferous and poorly bedded; 3) limestone beds, locally of pastel colors, that are generally less than 1 foot thick, non-persistent, tough, platy and poorly fossiliferous; 4) far fewer fossil snails and clams than the regionally continuous carbonate units of the middle and upper Flagstaff Formation. In contrast, lacustrine beds that bound the Colton Formation are characterized by the following features; 1) pale grey, fine-grained, subrounded sandstones, without crossbedding, that are rather thin and widespread (Flagstaff only); 2) yellow-brown or gray, thin-bedded, tough and platy limy shales that are fossiliferous and interbedded with limestone and dolomite units; 3) limestones and dolomites of several petrographic types that are two feet thick or more, and laterally persistent. When distinguished by the sum of these characteristics, the Colton consists in the central Gunnison Plateau of a northward-thinning wedge. From a thickness of 800 feet at South Maple Canyon, it thins to less that 550 feet at Wales Canyon, north of which it has been removed by erosion. The formation becomes much more clastic toward the north in the area studied.