Distribution and Abundance of the Japanese Snail, Viviparus Japonicus, and Associated Macrobenthos in Sandusky Bay, Ohio 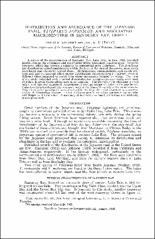 A survey of the macrobenthos of Sandusky Bay, Lake Erie, in June, 1963, provided information on the abundance and distribution of the introduced Japanese snail, Viviparus japonicus, which has become a nuisance to commercial seine fishermen. The abundance and distribution varied considerably within the bay; at the time of the survey, most snails were found near the north-central shore. Environmental characteristics were nearly uniform and had no apparent effect on the distribution; concentrations in different areas at different times appeared to result from water movements induced by winds. The time of the study coincided with a period of reproduction; young-of-the-year snails were most abundant in areas where adults were most common. The frequency distributions of shell height and diameter suggested the presence of two age groups of adults in the population. Considerable natural mortality was seen, both at the time of the study and in other seasons. Only three other gastropods were observed in the bay; the most abundant was another viviparid, Campeloma decisum. Other mollusks present were four species of Sphaeriidae and 18 species of Unionidae. A summary of invertebrates found, other than the mollusks, is also presented.