The Effect of DDT on Reproduction in Mice 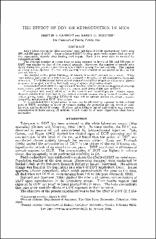 Adult laboratory mice {Mus musculus) were fed diets of chick starter mash containing 200 and 300 ppm of DDT. Some tolerated DDT feeding quite well; others died early in the experiment, shortly after feeding had begun. Some mice were able to survive for extended periods. The average number of young born to mice exposed to levels of 200 and 300 ppm of DDT was similar to that of the control animals. However, the number of female mice dying during the gestation period was much higher among the test animals. The number of young surviving from the test animals was much smaller as compared to that of the control litters. No changes in the gross histology of tissues in treated animals were noted. While both kidney and ovaries in test females decreased in weight, the adrenal glands increased in weight. The kidneys and testes of test males decreased in weight as the adrenal glands increased in weight, and they lost body weight appreciably before death. A two-sided t-test showed a significant difference between the mean weights of adrenals from control and from test male animals treated with 200 and 300 ppm of DDT. Conception was nearly identical in the control and treated groups. Better reproductive results were obtained in the control animals because many treated females died before giving birth. Starving DDT-fed mice led to almost immediate death, accompanied by symptoms of DDT intoxication. It is concluded that reproduction in mice can be affected by exposure to 200 and 300 ppm of DDT, resulting in death of females during the gestation period, death of male animals, and/or death of young. Further indiscriminate use of insecticides may increase reproductive failures among all wildlife, which could be of more importance than direct mortality.