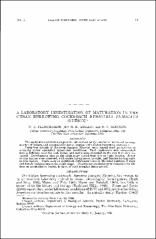 The study was undertaken to provide information on the number of males and females, number of instars, and accumulative instar lengths in the Cuban burrowing cockroach. Forty-four broods of Byrsotria fumigata (Guerin) were reared from parturition to maturity under controlled laboratory conditions. Each cockroach was color-coded with a different color for each instar, and molts were recorded on the day that they occurred. Development time to the adult stage varied from five to eight months. Seven to nine instars were observed, with males having seven to eight, and females having eight to nine instars. There were no significant differences between the total numbers of male and female cockroaches at the adult stage. Descriptive statistics were computed for the data on accumulative length, in days, of each nymphal instar period.