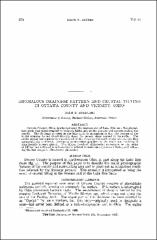 Ottawa County, Ohio, is situated near the western end of Lake Erie on a flat glaciallake plain that is interrupted by bedrock highs only at the western and eastern ends of the county. The drainage pattern on the lake plain is anomalous in that the courses of the major streams do not trend directly down the present slope normal to its strike. The entire region has apparently experienced tilting down to the north about an axis trending approximately east-west, producing an increased gradient to the north and resulting in considerable stream piracy. The tilting involved differential movement on the order of 2.8 feet per mile and is believed to be related to isostatic adjustment during and following the last stages of Pleistocene glaciation.