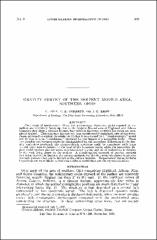 Over most of south-central Ohio, the sedimentary Paleozoic rocks exposed at the surface are relatively flat-lying, but in the Serpent Mound area of Highland and Adams Counties they show a circular feature, four miles in diameter, in which the rocks are complexly faulted. This structure has not yet been satisfactorily explained; two of the hypotheses proposed to explain its origin are 1) that it was caused by a "cryptovolcanic" event and 2) that it is an "astrobleme," produced by the impact of a meteoritic body. These two possible mechanisms might be distinguished by the attendant differences in the density variations produced: the cryptovolcanic structure could be associated with large lateral variations in density at the level of the basement rocks, while the meteoritic impact could produce shatter zones and brecciated layers, and small reductions in density in the rock lying closer to the surface. A closely-spaced network of gravity stations extending beyond the limits of the surface expression of the ring structure shows no gravity anomaly pattern that can be related to the surface features. Supporters of the astrobleme hypothesis are more likely to find this evidence useful than are the cryptovolcanists.