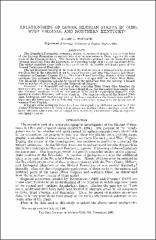 The Brassfield Formation, consisting mainly of carbonate strata, is overlain by beds of the Dayton Formation at several localities in southwestern Ohio, high on the east flank of the Cincinnati Arch. The Brassfield thickens eastward into the subsurface and becomes separated from the Dayton by an expanding wedge of shale and carbonate beds. The writer considers these beds to be equivalent to the middle and lower parts of the Noland Formation of Kentucky. The northernmost outcrop of the Noland Formation occurs in Adams County in southern Ohio, but in the subsurface it can be traced farther north into Pike County and thence northeast to Guernsey County, Ohio. The lower Plum Creek Clay Member of the Noland continues into northern Ohio and Ontario, where it merges with the Cabot Head Shale. The Brassfield Formation can also be traced in the subsurface from the outcrop in Adams County northward into the Manitoulin Dolomite of Ontario. Eastward, the Brassfield and part of the overlying Plum Creek Clay Member (in southern Ohio and in Kentucky) or the Cabot Head Shale (farther north) intertongue with the "Clinton" sandstone in central and eastern Ohio and the equivalent Tuscarora Formation in eastern Kentucky and West Virginia. The upper members of the Noland (Oldham, Lulbegrud, and Dayton) and part of the lower member can be traced from southern Ohio into the lower part of the Rose Hill Formation where it occurs in the subsurface of western West Virginia. Although some geologists have failed to distinguish the different members of the Noland Formation from the Brassfield in subsurface studies, information from recent drill holes indicates that these can be traced from Kentucky into southern Ohio as separate stratigraphic units.