Biology of the Freshwater Drum in Western Lake Erie 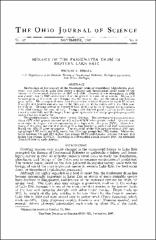 Information on the biology of the freshwater drum or sheepshead (Aplodinotus grunniens) was collected in Lake Erie during a fishery and limnological study made by the Bureau of Commerical Fisheries in 1957 and 1958. Growth of the sheepshead in 1958 was slower than in 1927, and slower than the growth in most other waters. Males and females grew at the same rate through the 4th year of life, but thereafter the females grew faster. Males required more than 13 years and females 11 years to reach 17 inches. A weight of 2 pounds was attained in the 12th year of life by males and in the 10th year by females. Annulus formation extended from mid-June to early August for age-groups I-IV (2nd through 5th year of life). Younger fish started growth earlier in the season than the older fish, and the larger, faster growing members of an age group began growth earlier than the smaller fish. The growing season in 1958 ended in early October. Bottom-water temperatures were about 65°F when growth started (mid-June) and 58°F when growth ended. Growth was most rapid in August when temperatures were highest for the year (72 °F). Growth of young of the year, but not that of older fish, was positively correlated with temperature during the 1951-57 growing seasons. The sex ratio of the 1958 samples shifted with age; age-groups I-IV contained 54% males, but older age groups had 75% males. Males matured between 7.0 and 15.9 inches (age-groups II-V) and females between 9.0 and 13.4 inches (age-groups III-VII). Spawning in 1958 reached a peak in early July, but extended from mid-June to early August.