Prediction of Stage, Bathymetry, and Riparian Vegetation of the Lower Olentangy River After Removal of the Fifth Avenue Dam 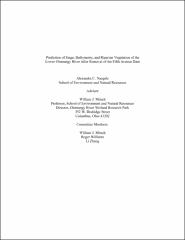 The Olentangy River is a third order stream as it passes through urban Columbus, Ohio with an average flow of 191 ± 13 cfs and an annual peak flow of 2372 cfs (67.2 m3/sec). As it passes through the city, it is impounded by several low-head dams. The 2-mile reservoir created upstream of a dam (referred to as the Fifth Avenue Dam) on the river and adjacent to The Ohio State University campus is currently in non-attainment of biological and ambient water quality standards. Planned river ecosystem restoration of this pool is based on the removal of the Fifth Avenue Dam, which would increase stream velocity and sediment transport, improving total water quality. This study looks at the relationships among flow, stage level, and current bathymetry of the Olentangy River to predict the bathymetric profile of the river upstream of the dam after it has been decommissioned and the vegetation that will result on new riparian areas. The flow of the river was calculated as a function of the river stage using a rating curve developed by the U.S. Geological Survey for the Olentangy River Wetland Research Park (ORWRP) and previous research at the ORWRP. Using the relationship between river stage and flow, we predicted changes in the bathymetry of the Lower Olentangy River. Additionally, we predicted an increase of riparian vegetation by 47 acres (for an 80% drop in stage), with expected riparian vegetation based on the growth pattern of emergent vegetation at similar locations along the river and at the Olentangy River Wetland Research Park.