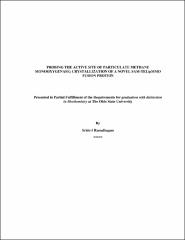 Particulate methane monooxygenase (pMMO) is an integral membrane metalloenzyme vital for facile methane oxidation in methanotrophic bacteria under ambient conditions. The active site and mechanism of pMMO’s conversion of methane to methanol is controversial. Previous research has suggested the existence of a mononuclear copper active site, a dinuclear copper active site, or a mononuclear zinc center based on the crystal structure of the pMMO protein. Conversely, electron paramagnetic resonance (EPR) and X-ray absorption spectroscopies have been used to argue for a trinuclear copper cluster site. To address the ambiguity surrounding the composition of the active site, we have cloned and overexpressed a SAM-TEL/pMMO peptide fusion protein. This protein consists of a SAM-TEL polymerization domain that is used to promote facile protein crystallization and a 12-residue peptide segment from pMMO that has been proposed to bind the active site trinuclear copper cluster predicted by spectroscopy. Two different versions of SAM-TEL/pMMO protein have been successfully purified and crystallized. SAM1TEL/pMMO fusion protein contains a fused pmoA peptide per SAMTEL monomer and hexagonal crystals of this fusion protein that diffract to a resolution of 2.8 Å have been obtained. SAM3TEL/pMMO fusion protein is composed of one pmoA peptide per three SAMTEL monomers and initial crystallization efforts resulted in small rod-like protein crystals. Chemical characterization experiments such as UV titration of SAM1TEL/pMMO fusion protein with Cu(OAc)2 support the ability of the pmoA peptide to bind copper. UV titration of a SAM1TEL-control protein reveals that the copper binding ability of the SAM1TEL/pMMO is not a result of the SAMTEL protein. EXAFS experiments further corroborate the ability of the pmoA peptide to bind copper in the proposed ratios (3 copper: 1 peptide) corresponding to that of a trinuclear copper cluster site.