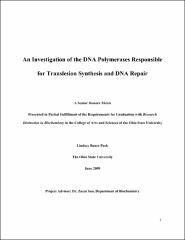 The replication of DNA is vital to the survival of any organism. The ability to replicate DNA, however, is compromised by the continual onslaught of DNA damaging agents, which include UV light, oxidative stress, and a variety of environmental pollutants. DNA damage stalls the replication of the genome by the normal replicative polymerases. Thus, in order for cell survival, this damage must either be repaired or overcome by translesion synthesis. The X- and Y- families of DNA polymerases have been implicated in these cell survival pathways. These families of DNA polymerases have roles in both the bypass of DNA lesions as well as filling gaps in DNA synthesis. Despite the significance of their function, many aspects of the mechanism by which these DNA polymerases overcome DNA damage are largely unknown. Thus, there is an obvious need to investigate the structure, function, and the mechanism of translesion synthesis of specific X- and Y- family polymerases.