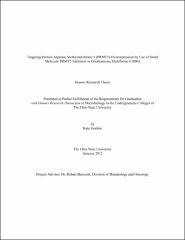 High grade astrocytomas (grade III and IV tumors) are the most common and aggressive brain tumors that carry a bleak prognosis with an average survival of less than 15 months despite multimodal therapy. Therefore, there is a great need for new therapies to target grade III and grade IV (glioblastoma multiforme, GBM) astrocytomas. Recent studies have shown epigenetic regulation of chromatin plays a key role in cell growth, differentiation, and survival. Chromatin remodeling enzymes like histone deactylase (HDAC), DNA methyltransferase, and protein arginine methyltransferase 5 (PRMT5) are involved in silencing tumor suppressor gene (TSG) expression and contribute towards cellular transformation. PRMT5 contributes towards transcriptional inhibition of several regulatory genes by symmetric dimethylation of arginine residues on histone proteins (histone 4 arginine residue 3 (H4R3) and H3R8) and works more efficiently when associated with other co-repressor enzymes. Our lab has shown that epigenetic processes driven by over expression of PRMT5 are important in regulation of oncogenic pathways operative in GBM. Our studies have shown that the amount of PRMT5 over expression inversely correlates with the survival of GBM patients and correlates directly with proliferation of these cancerous astrocytes. Our lab developed small RNA molecules (siRNA) that inhibit PRMT5 expression which leads to loss of symmetric dimethyl H4R3 and transcriptional de-repression and translation of tumor suppressor and immune modulatory genes. PRMT5 knockdown in GBM cells by this siRNA leads GBM cells to undergo cell cycle arrest, apoptosis, inhibition of cell migration, and sensitization to the anti-tumor effects of temazolomide, a drug used in therapy for GBM patients. Because therapy using siRNA is still in the experimental stage, there was a need to look for small molecule compounds that could inhibit PRMT5 in a similar way. Using a computational modeling system, our lab identified several compounds that looked promising. Two compounds were identified as selective inhibitors of PRMT5 activity (CMP5 and BLL54). Both compounds were able to selectively inhibit the methylation of histone 4 arginine 3. This knockdown led GBM cells to undergo cell cycle arrest and apoptosis. When used in combination with other inhibitors, we saw de-repression of transcriptional activity and restoration of protein expression of the chemokine CXCL10 which was identified as a potential target of PRMT5. Both compounds were able to induce these effects, but BLL54 showed to be more potent. These findings identify these small molecule PRMT5 inhibitors as a new potential drug regimen for patients afflicted with this cancer.