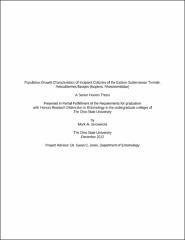 Growth of Reticulitermes flavipes incipient colonies was documented for their first year. Each month, 15 established colonies, each headed by a queen and king pair, were censused, with data obtained for the number of individuals of each caste and/or developmental stage and their collective mass. The mass of the king and queen was individually measured. A grand total of 180 colonies was examined. Egg production was intermittent during the first year, with the greatest number of eggs (mean = 14.5) produced during the first month. Three cohorts of eggs were produced and egg production was not constant Larvae were observed at 1 mo and workers (> second instar) were first observed at 2 mo. The survival rate of the initial brood was less than 100%, since the average number of eggs, larvae, and workers in the first two months decreased during the following months. At the 6-mo census, a soldier was observed in each of two colonies with total populations of 12 and 13 individuals. Soldiers were sporadically present in colonies thereafter and the number of colonies containing a single soldier increased at the 12-mo observation. One-year-old colonies ranged in size from 20 to 40 individuals, including the king and queen, with an average of 28.9 individuals. King and queen mass greatly decreased during the first two months, coinciding with egg production and colony foundation, and their mass remained relatively constant through the 12-mo observation. Offspring biomass was equal to that of the reproductive pair at the 2-mo census, double at 3 mo, and quadruple at 11 mo. Total biomass of each colony gradually increased over time. The average biomass of a 1-yr-old colony was 39.8 mg. The growth rate observed in this study was much slower than that observed by others (Snyder and Popenoe 1932, Grube and Forschler 2002). Overall, this study’s results are consistent with previous models and suggestions regarding colony growth (Grube and Forschler 2004, Suiter et al. 2002), but this study provides the numerical data.