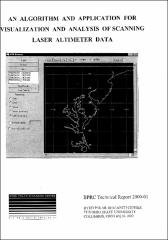 Ice sheet elevation changes have been measured by repeat airborne laser altimetery in Greenland since 1991. The Airborne Topographic Mapper (ATM) system, which has been mounted in a NASA P-3 aircraft, includes a scanning laser altimeter, INS and differential GPS. During the post-processing the measured data are converted into measurements of ice sheet elevation relative to the Earth ellipsoid (Krabill et aI., 1995). Since laser scanner data sets are composed of a huge amount of points, obtaining the swath contour and locating overlapping areas between different swaths in an efficient way is not a simple task. To make this task more feasible a thinned data set called ICESS has been created from the laser data collected over the Greenland ice sheet (Martin, 1997). Since the surface is reasonably smooth, the laser swath was modeled as a series of planes, each characterized by a center elevation, a north-south slope, and an east-west slope. However, for many applications such as mapping the rough surface of outlet glaciers or surveying urban areas, the original dense laser points are needed. Our major goal is to develop software to access, display, and manipulate the original binary data files. By using a single application the user should be able to determine the overlap between several surveys, compute elevation changes, and create OEMs and contour maps. So far we were mainly focusing on the first part of the job, namely, providing tools for locating the laser swaths and their overlapping areas. In this report we present the algorithm that we recommend for an efficient contour extraction from laser swaths data and the application that was developed for this purpose. The report is organized as follows. First the major objectives of the development of the algorithm are presented and then the algorithm itself is described. The fourth chapter describes the application functionality, and it is followed by a documentation of the software modules and the installation guide.