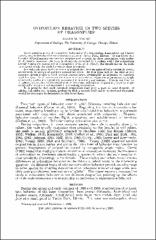 A comparative study of oviposition behavior of the dragonflies, Anax junius and Tramea onusta, was undertaken for two successive years in Tinley Park, Illinois. It was found that females of both species use tandem position and oviposit in close association with males. In A. junius, however, the male is physically attached to (tandem with) the ovipositing female during the actual act of oviposition, while in T. onusta, the female leaves the male to oviposit while the male hovers in close proximity. Immediately prior to the moment of oviposition, tandem pairs of both species fly about, presumably in search of suitable oviposition sites. At this time and at the time of oviposition, single males of both species assault pairs, presumably in attempts to copulate with females. In T. onusta, at the moment of oviposition, when the pairs separate, single conspecific males are repeatedly successful in arresting oviposition. This is not true for A. junius, where, due to the attachment of the male, assaults on ovipositing pairs by single conspecific males are not successful in arresting oviposition. It is possible that such arrested oviposition may play a part in local dispersal of adults, but additional studies, preferably with a species more easily marked and captured, would be necessary to demonstrate this hypothesis.