Spatial and Seasonal Distribution of Planktonic Cladocera in a Small Reservoir 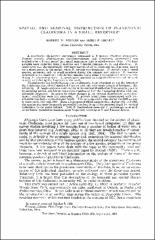 A planktonic cladoceran community composed of 4 species (Bosmina longirostris, Daphnia parvula, Diaphanosoma leuchtenbergianum, and Ceriodaphia quadrangula) was studied over a 3-year period in a small man-made lake in southwestern Ohio. Plankton samples were collected from 3 stations and 4 depths (surface, 3-, 6-, and 9-meters). B. longirostris was the numerically dominant species at all stations and in all seasons, except for a short period in the spring, when D. parvula was dominant. D. parvula was a vernal species, persisting only in small numbers during the summer and autumn. D. leuchtenbergianum was classed as a polythermic species, being present in significant numbers, only during the warmest periods. C. quadrangula appeared as a significant member of the community only during the final year of the study. Diaphanosoma leuchtenbergianum was consistently most abundant at the shallowest of the 3 stations; the other 3 species did not exhibit any consistent pattern of horizontal distribution. B. longirostris was very erratic in its vertical distribution from sampling period to sampling period, exhibiting population maxima at 3 of the 4 sampling depths with considerable frequency. Attempts to relate changes in its vertical distribution to environmental conditions were not successful. D. parvula populations concentrated with considerable regularity at the 6-meter depth. This was especially true during the 1962 season, in contrast to 1961 and 1963. Data are presented which suggest that, during 1961 and 1963, the species was more frequently prevented from localizing at its preferred depth by vertical turbulence in the water column. Both D. leuchtenbergianum and C. quadrangula were midwater forms, population maxima most frequently occuring at 3- and 6-meter depths.