Reading Jane Austen through an Epic Lens: Pride and Prejudice and Emma (The Pursuit of Kleos in a Feminine Sphere) 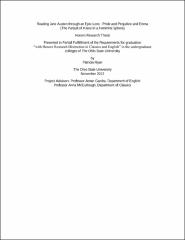 This paper explores the relationship between the novels of Jane Austen and Greek epic. The purpose of epic is for the hero to achieve his "kleos" (glory): kleos is achieved solely through the male sphere of war and battle. This paper argues that Jane Austen's novels, particularly Pride and Prejudice and Emma, are "female epics" in the sense that they allow the heroine to achieve her kleos through the feminine sphere, by making a good marriage. Jane Austen's heroines, Elizabeth Bennet and Emma Woodhouse, mirror Homer's heroes, Odysseus and Achilles, respectively. Elizabeth and Odysseus represent the "cunning" hero, whereas Achilles and Emma represent the "vain" hero. Furthermore, the paper explores thematic similarities between Jane Austen's novels and Homer's epics including the importance of patriarchy in the formation of the hero and heroine and the moment of "anagnorisis" (revelation/recognition). Issues taken into consideration in the discussion of this topic are societal differences between Homeric Greece and late 18th/early 19th century England, gender differences and the implications that they have on female heroism, and the differences between the novel and epic as genres.