Remarkable Sympatry in the Winter Stoneflies Allocapnia Indianae and A. Ohioensis, a Pair of Sister Species 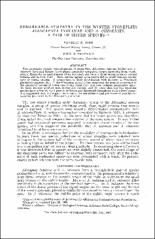 Two extremely closely related species of stone flies, Allocapnia indianae Ricker and A. ohioensis Ross and Ricker, have almost perfectly sympatric ranges extending from southcentral Kentucky to southeastern Ohio, with isolated areas of distribution in south-central Indiana and in New York. Both species appear to be restricted to small streams having cave or spring origins. A comparison of their distribution with features of Wisconsin glaciation suggests that (1) the Wisconsin glacial lobes separated the area of occurrence of the ancestral species of these two living stone flies into two isolated geographic units, (2) these isolates evolved into distinctive species, and (3) since then the two resulting species have achieved rigid genetic isolation and dispersed throughout each others' range. It is suggested that the original isolation of the pre-indianae and pre-ohioensis populations occurred just prior to the Wisconsin glaciation.