Official Proceedings of the One Thousand Four Hundred and Fifty-Sixth Meeting of the Board of Trustees, Columbus, Ohio, February 10 & 11, 2011 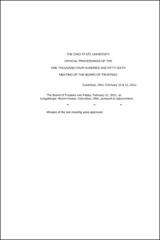 This item is the meeting minutes of the Board of Trustees of The Ohio State University held on February 10 & 11, 2011 at the Ohio State University Longaberger Alumni House, Columbus, Ohio. Brandon Mitchell presented Danielle Gadomski and Joseph Esch for the Student Recognition Award. President E. Gordon Gee gave the President's Report. The committee reports were then discussed. The consent agenda included the following resolutions: Ratification of Committee Appointments 2010-2011, Distinguished Service Awards, Amendments to the Bylaws and the Rules and Regulations of the Medical Staff of the Arthur G. James Cancer Hospital and Richard J. Solove Research Institute, Ratification of Appointments to the Medical Center Boards, Separation Incentive and Phased Retirement Program, China Gateway Project: Formation of a Wholly Foreign Owned Enterprise in China, Amendments to the Rules of the University Faculty, Merger of the Department of Plant Cellular and Molecular Biology and the Department of Molecular Genetics to Become the Department of Molecular Genetics, Establishment of a Master’s in Mathematical Sciences Degree Program, Establishment of the Department of Microbial Infection and Immunity, Naming of the Center for Mathematics and Science Education Policy at the John Glenn School of Public Affairs: Battelle Center for Mathematics and Science Education Policy, Re-Naming of the Jones Graduate Tower, Naming of Internal Spaces, Honorary Degrees, Degrees and Certificates Winter Quarter Commencement, Resolutions in Memoriam, Adoption and Approval of an Institutional Advancement Model, University Development Report, The Ohio State University Development Fund, The Ohio State University Foundation, Adoption and Approval of an Institutional Advancement Model, University Development Report, Amended Authorization to Enter into Professional Services Contracts and Construction Contracts, Approval to Enter into Professional Services Contracts, Approval to Enter into Construction Contracts, Support of an Application to the Department of Development, Acceptance of the Report of Audit for 2009-2010, Ratification and Approval of the Amendment and Restatement of the Ohio State University Supplemental Qualified Retirement Plan, Renamed the Retirement Continuation Plan, Naming of the Marci and Bill Ingram Comprehensive Center for Autism Spectrum Disorders at the Ohio State University Medical Center and Nationwide Children’s Hospital, Personnel Actions, various appendices and The Ohio State University Retirement Continuation Plan.