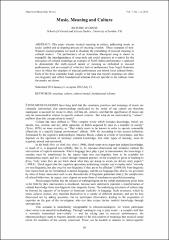 This paper situates musical meaning in culture, addressing music as social symbol and as ongoing process of meaning creation. Three examples of non- Western musical practice are used to illustrate the embedding of musical meaning in cultural context. The performance of an Australian Aboriginal song is shown to exemplify the interdependence of song style and social structure as a matrix for the emergence of cultural meanings; an example of North Indian performance is adduced to demonstrate the multi-layered nature of meaning as embodied in musical performance; and an example of collective festival performance from Nepal illustrates ways in which the structure of musical performance can mirror local cultural forms. Each of the three examples lends weight to the idea that music's meanings are often non-linguistic and reflect foundational schemas that are specific to the cultures from the musics are drawn.