Conversion Yields of Some Photographic Emulsions and Related Factors 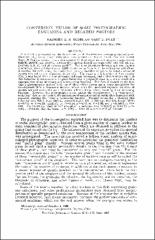