Beyond Mosque, Church, and State: Negotiating Religious and Ethno-National Identities in the Balkans 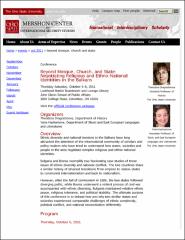 Ethnic diversity and national tensions in the Balkans have long attracted the attention of the international community of scholars and policy-makers who have tried to understand how states, societies and people in the area negotiate complex religious and ethno-national identities. Bulgaria and Bosnia exemplify two fascinating case studies of these issues of ethnic diversity and national conflict. The two countries share a similar history of strained transitions from empires to nation-states to communist internationalism and back to nationalism. However, after the fall of communism in 1989, the two states followed diverging paths; while Bosnia underwent a violent process of civil war accompanied with ethnic cleansing, Bulgaria maintained relative ethnic peace, religious tolerance, and political stability. The ultimate purpose of this conference is to debate how and why two similar states and societies experienced comparable challenges of ethnic complexity, political conflict, and national reconciliation differently.