What is the Future of Al Qaeda? 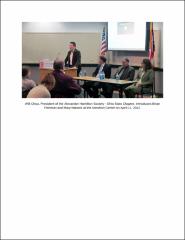 Mary Habeck is associate professor in strategic studies at Johns Hopkins School of Advanced International Studies, where she teaches courses on military history and strategic thought. Before coming to SAIS, Habeck taught American and European military history in Yale's history department from 1994 to 2005. She received her PhD in history from Yale in 1996, an MA in international relations from Yale in 1989, and a BA in international studies, Russian, and Spanish from Ohio State in 1987. Brian Fishman is a counterterrorism research fellow at the New America Foundation and a research fellow with the Combating Terrorism Center at West Point. He previously served as the CTC's director of research and was a professor of social sciences at West Point. Fishman was a regular contributor to the CTC's Harmony Project reports; he authored Dysfunction and Decline: Lessons Learned from Inside al-Qa'ida in Iraq, co-authored al-Qa'ida’s Foreign Fighters in Iraq: A First Look at the Sinjar Records, and edited Bombers, Bank Accounts, and Bleedout: al-Qa'ida's Road In and Out of Iraq. As part of his duties at West Point, Fishman deployed to Iraq and served on the CENTCOM Assessment Team. Fishman was a founding editor of the CTC Sentinel.