Ideology versus Profit: Drugs and Insurgencies in Afghanistan and Colombia 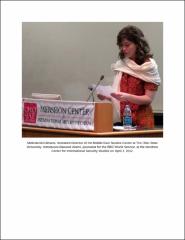 Afghanistan and Colombia are two major drug-producing countries experiencing protracted and bloody armed conflicts which have claimed the lives of tens of thousands of people. Colombia's leftist rebels, FARC, and the Taliban in Afghanistan are sophisticated insurgency movements with ideologically dominated political agendas. However, there are signs that FARC's socialist ideology and the Taliban's ideology -- a mixture of nationalism and religious fundamentalism -- are in decline with both groups increasingly relying on narcotics to fund their violence. Militant groups and organized crime live in symbiosis with each other in many parts of the world. FARC's links with drug trade are well established with profits from the drug trade and trafficking. Meanwhile, Taliban's links to the drug trade are increasingly becoming clear. Comparisons are now being drawn between the Taliban movement in Afghanistan and other belligerent groups with links to drug production and trafficking. Some Afghan officials and members of international community in Afghanistan have expressed their concerns about the possible "FARCification" of the Taliban. While describing motivations, recruitment and mobilization of insurgents in Afghanistan and Colombia, Dawood Azami -- visiting scholar and award-winning broadcast journalist -- assesses the intensity of ideology and compares it with the groups' focus on power accumulation and profits. He analyzes the impact of the groups' involvement in the drug trade on their physical resources, political capital and ideology.