Characterization of mineralization in sediments around potential methane hydrate fractures 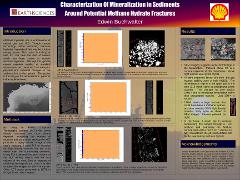 Methane hydrates are a frozen mixture of natural gas and water which remain stable in sea floor sediment. In the future these could become a valuable source of energy however with current technology extraction is impractical. I believe that the hydrates change the sediment surrounding them both physically and chemically, potentially altering mineral makeup. This experiment used X-ray Computed Tomography (XCT) to measure density differences within the core, allowing me to interpret the mineralization of the sediment from hole KC 151 in the Gulf of Mexico. The initial results do show promise as the segment of core which is believed to have contain a methane hydrate fracture shows a significantly greater amount of pyrite (5.5% for 17H-4 versus .7% for 8C-1) than the sediments higher up in the core where there is little evidence for hydrates. An unexpected find was a change in the pyrite formation, with 8C-1 showing round pyrite nodules while 17H-4 shows pyrite forming in the bioturbation. Though promising, more research will be conducted on total organic carbon (TOC) and the physical evidence left behind by evaporating hydrates.