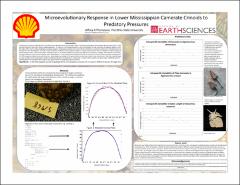 Crinoids were relatively unaffected by the end-Devonian Hangenberg event, but the major clades of Devonian durophagous fishes suffered significant extinctions. These dominant Devonian fishes were biting or nipping predators. In response to the Hangenberg event, Lower Mississippian crinoids underwent an adaptive radiation, while fish clades with a shell-crushing durophagous strategy emerged. Durophagous predators were more effective predators on camerate crinoids and it is hypothesized that through the Lower Mississippian, camerate crinoids evolved more effective anti-predatory strategies in order to compensate for the more effective predatory strategy of the durophagous fishes. More convex plates and longer spines are commonly regarded to provide more effective anti-predatory strategies. Did convexity and spinosity increase among camerate crinoids during the Lower Mississippian? A new method was formulated to test for an increase in convexity of the calyx plates among species of 2 different genera, Agaricocrinus and Aorocrinus. Spine length was analyzed in the genus Dorycrinus and was a simple linear measurement. Data are analyzed using a runs test to determine if morphological change is statistically significant of represents a random walk. Change in plate convexity and spine length in different species is representative of microevolutionary change as new species evolve to changing ecological conditions.