Pacific Ascendancy: Or, A Non-Atlanticist View of the American Position in the World 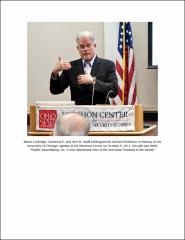 Dominion From Sea to Sea is a non-Atlanticist account of America's position in the world over the last 150 years, one that sees the U.S. as the only advanced industrial power with long Atlantic and Pacific coastlines — a tremendous comparative advantage. It emphasizes the importance of American encounters with people of color on the continent -- Mexico in the 1840s, the Philippines in the years 1898-1903, and East Asia since 1941 -- in exploring the history of unilateralism and how this experience shaped a very different encounter with the world than did Atlanticism. The book tries to bridge the academic boundary between Western history and our Pacific history, which is rarely done in the literature, and also argues for the central important of Western high-tech industries in the dominant American position in the world since 1941. It is thus a mix of history and political economy.