Deforestation as a Multifaceted Problem; a Cross-National Econometrics Approach 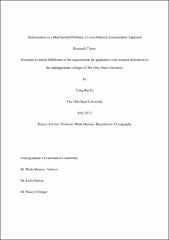 Deforestation is a growing worldwide issue. According to the Food and Agriculture Organization of the United Nations (FAO), between 2000 and 2010, deforestation has resulted in a net forest loss of 5.2 million hectares per year which is equivalent to the area of Costa Rica. Prior large-scale research on deforestation stressed either the pressure of population growth or economic development as the main drivers of deforestation. At the more local level, case studies have demonstrated that in addition to socioeconomic processes, environmental variation, patterns of energy consumption and governance are often critical. Thus, in the attempt of questioning deforestation with policy, there is the need to formulate a model that extends globally yet is sensitive to each individual country’s variation, at the same time taking into account environment, socioeconomic, energy and governance factors. With an ordinary least squares model comprised of 187 countries, the dependent variable of deforestation is regressed against the diverse spectrum of independent variables. Preliminary findings have demonstrated the explanatory power of a broader range of variables. By formulating a condensed model of deforestation, it is proven that all four categories of variables explain certain extend of variation in deforestation across countries. In spite of the fact that the socioeconomics processes segment of the model indicated significant correlation to deforestation, it encompassed more variables than merely pressure of population growth and economic development. Therefore, in examining the issue deforestation, research should not solely analyze any limited dimensions, but expand the scope to all aspects that are equally important in driving deforestation.