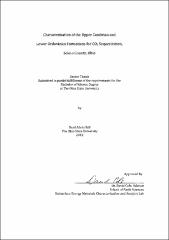 Carbon dioxide sequestration into porous rock intervals beneath the Earth’s surface is an emerging technique of reducing the amounts gaseous CO2 emitted by energy production through the burning of coal/peat. Target intervals of rock must have sufficient pore space, permeability, thickness, depth from the surface, and must be located beneath an impermeable geologic seal to serve as a reservoir for the sequestration of supercritical CO2. The Upper Cambrian-Early Ordovician Knox Supergroup including the Copper Ridge Dolomite, Rose Run Sandstone, and Beekmantown Dolomite formations found within the Aristech Well in Scioto County, Ohio may have all the necessary requirements to serve as a viable combination of CO2 reservoir and geologic seal. This research seeks to characterize samples drawn from these formations on the basis of petrography, porosity, pore size and distribution, permeability, bulk mineralogy, and brine chemistry to distinguish suitable sequestration horizons in conjunction with an overlying caprock. Light microscopy, scanning electron microscopy, mercury porosimetry, and x-ray diffraction analyses established a porous and permeable reservoir interval including the upper Copper Ridge and entire Rose Run overlain by the impermeable Beekmantown Dolomite. The Rose Run Sandstone was the most favorable for CO2 storage, while vertical heterogeneity within the Copper Ridge Dolomite limited the reservoir thickness. Porosity measurements for the reservoir were between 3 and 8%, permeability was 16-50 mDarcies, while the caprock porosity was 1% and permeability of 7 mDarcies. Porosity and pore size distribution between and within samples is controlled by mineralogy, mineral nucleation, diagenesis, and heterogeneity. Volumetric estimations show that the Copper Ridge/Rose Run reservoir could hold up to 5.6 million metric tonnes of supercritical CO2 under the most favorable conditions.