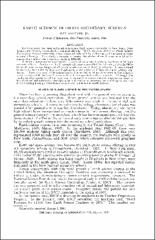 Earth science has been initiated into many high school curricula in New York, New Jersey, and Pennsylvania during the past decade. With the availability of Earth Science Curriculum Project materials, many more schools will be including earth science in their science offerings. This study attempts to assess the status of earth science in Ohio by means of a questionnaire survey, made in 1964-65. A short questionnaire was mailed to each of sixty earth science teachers in 52 high schools in Ohio. Analysis of the 51 completed returns provided the following data: In 1964-65, earth science was taught at all grade levels in some of the high schools. It was offered to students at all ability levels, though some schools offered it only to higher ability students. There was very little opposition to the initiation of earth science in the schools; most teachers felt that earth science should be expanded in their schools. Although the background preparation of the teachers in the earth sciences was not impressive, most of the teachers had substantial backgrounds in the other sciences and were willing to improve their training through attendance at summer institutes in earth science.