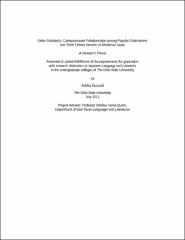 The popular female entertainers of the Heian (794-1185) and medieval (1185-1600) periods of Japan were quite successful in establishing themselves as adept purveyors of song, dance, and sexual pleasures. Many female entertainers gained the patronage of the rich and powerful, such as emperors and prominent warriors. Both in historical records and fictional accounts, entertainers who were associated with a powerful patron would often have their names, and possibly stories about them as well, written down in medieval histories or literary narratives. However, most of the entertainers I will discuss in this study are fictional or semi-fictional characters found in narratives such as The Tale of the Heike (Heike monogatari) and Nō plays. The three types of female entertainer featured most often in medieval narrative and Nō theatre are asobime, shirabyōshi, and kusemai, each of whom will be examined in depth in Chapter 2. In medieval narrative, female entertainers were often thrust into difficult situations by their patrons or by other unforeseeable circumstances, sometimes forcing the women to make a choice between retaining their livelihoods and becoming nuns. (The importance to a performing woman of finding and holding on to patronage will be discussed in Chapter 3). The trying circumstances in these stories more often than not act as prompts that cause beleaguered entertainers to turn to their fellow women for comfort and security. In fact, solidarity among female performers and fellow women is a recurring motif in a range of medieval literary works, or so I will argue. Chapter 4 will examine some representative medieval narratives. I will introduce the stories and the performing women from The Tale of the Heike and Yoshitsune: A 15th Century Chronicle (Gikeiki) that exemplify this solidarity theme. Other works inspired by these stories, especially Nō plays, habitually place characters from medieval narrative sources into different or altered settings, but rarely do they drastically change the essence of a character or his or her story. There are many Nō plays about female performers, but three of the plays I will be looking at in Chapter 5 preserve, even further emphasize, the theme of solidarity among female performers introduced in earlier source narratives, while a fourth play utilizes the theme of solidarity in a story original to Nō. I will conclude with a short look at a recent historical drama on Japanese television that makes use of, if not recognizes outright, the solidarity trend among medieval female entertainers. In the chapters that follow, I hope to be able to shed some light on why performing women were depicted in medieval narratives as having a propensity for creating strong kinship bonds with other women. I will explore female entertainers’ documented ways of life, their power and marginalization in society, and how others viewed these women and their trade. Then, I will look at the various ways female entertainers are depicted in medieval narratives and Nō plays. While exploring these facets, I will attempt to show what the literary representations of solidarity among female entertainers might have been inspired by, and that these representations demonstrate a trend that allowed for depictions of entertainers as women who were both able and willing to create bonds of solidarity with the other women around them.