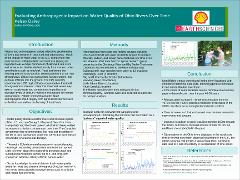 Many natural and anthropogenic factors affect the geochemistry of surface waters like rivers and streams in rural and urban areas. Much impact on fresh water in the United States comes from non-point sources, with population and land use playing an important role. Major components of input into surface waters are chloride and sodium, derived mostly from urban contributions such as road salt, and nitrate, largely from agricultural sources like fertilizers, as well as the burning of fossil fuels. Fresh water quality historical data exists for many Ohio rivers, however much of it has never been further utilized to observe ion concentration trends over past decades. I have tabulated past data from state and federal sources such as USGS and data from Dr. Lyon’s research group from the 2000’s to identify long-term trends in ion concentrations in rivers at multiple locations throughout the greater Columbus area. In June, I sampled the same sites examined in the past and analyzed the filtered samples for major ions and nutrients. By comparing the summer 2012 samples to those from same sites in the past, the magnitude of the effects of urban and rural contributions on surface runoff and fresh water quality will be determined.