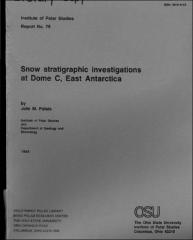 Institute of Polar Studies Report No. 78.

Current interest in studies of past climatic changes as revealed in long ice cores has stressed a need for understanding the development of the record preserved in these cores. This study investigates whether the record preserved at depth is more a function of depositional processes or of processes acting during or soon after burial. The temporal and areal variability of accumulation are investigated with a view to understanding how representative a single core is for a certain region, both in time and space. The validity of certain stratigraphic interpretations for dating is also assessed. Evidence from snow pit studies made at Dome C, East Antarctica, (74° 34'S, 123°l0'E) suggests that a major part of the depositional features are preserved with depth. Visible annual strata are composed of thin hard crusts overlying thicker layers of soft to medium hard snow. Depth hoar-like low density layers, when they occur, are most often found below the thin hard crusts. Cycles in the concentration of gross Beta radioactivity and microparticles occur and can be accurately dated when studied in conjunction with a detailed record of the visible stratigraphy. Accumulation stake measurements are used to study the formation of annual layers at Dome C. These measurements support the belief that depositional processes can account for a major part of the stratigraphic record. Strong near surface temperature gradients and the associated effects of thermal conduction, vapor diffusion and air convection contribute to the development of depth hoar and with time may lead to significant changes in the variations in hardness, density, grain size and possibly impurity concentration and total mass preserved in individual layers.

Copyright 1980, Used by permission of the author