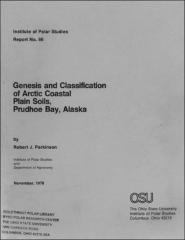 Institute of Polar Studies Report No. 68.

A soil survey was conducted over some 140 km2 of oil field at Prudhoe Bay, Alaska during the 1974 and 1975 field seasons. The survey involved both field study and laboratory characterization of the typical soils. Soil-land form relationships were studied, and soil genesis was hypothesized. Soil genesis, morphology and classification were found to be closely related to geomorphic processes including: (1) the thaw lake cycle, (2) patterned ground formation and (3) differential loess deposition. The U.S. Department of Agriculture-Soil Conservation Service classification system, Soil Taxonomy, was tested relative to these soils, and some classification modifications were proposed involving: (1) the definition of the pedon, (2) recognition of the pergelic temperature regime at the suborder level and (3) the definition of organic soil material. Several classification modifications of a minor nature were developed involving the establishment of new taxa at the subgroup level.