An Examination and Analysis of the Formation of Transverse Crevasses, Kaskawulsh Glacier, Yukon Territory, Canada 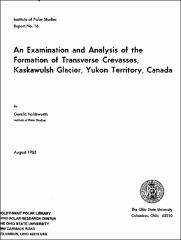 Institute of Polar Studies Report No. 16

The main purpose of this investigation was to examine the applicability of Nye's theoretical expression for the longitudinal strain rate on the surface of a valley glacier; and to investigate the mechanics and mode of formation of transverse crevasses. In an area at the head of a valley glacier a regional strain rate field was derived from velocity and strain net measurements. The result of a comparison between measured and computed strain rates is inconclusive because the assumptions on which the theoretical equation is dependent are not valid except in one short section, where an approximate agreement is found. A value of regional longitudinal extending strain rate of about 3.5 x 10 -5 day -l is associated with the occurrence of the first transverse crevasse in previously unfractured firn. The strain rate gradient and hence the rate of stress development associated with this critical strain rate is considered to be important. Localized strain rates and stresses of at least an order of magnitude greater than regional values are deduced to be responsible for fracturing of ice. Regional values of strain rate do not give a theoretical depth of crevasses close to the observed values. Strain rates of at least an order of magnitude greater are required to produce a rough agreement. Crevasse spacings average 2.8 x mean crevasse depth, which is about 26 meters. Some methods of computing crevasse spacings are given. Nielsen's formula gives spacing close to the mean of the measured spacings. A concept of the formation of transverse crevasses is discussed. This follows closely the hypothesis of Meier. The crevasses appear to be forming at the margins of the ice stream and to be propagating quietly towards the center; a plastic rather than an elastic behavior is thus suggested. Suitably placed seismograph stations could be used to locate initial points of failure within the ice.