Paleoecological Investigations of Diatoms in a Core From Kerguelen Islands, Southeast Indian Ocean 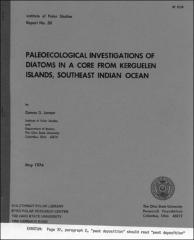 Institute of Polar Studies Report No. 50

Percentage frequencies of diatom taxa from 20 levels in a sediment core from Kerguelen Island, Southeast Indian Ocean were considered in light of known present ecological preferences, and populations at varying levels compared. By using diatoms as environmental indicators, and also considering physical stratigraphy, environmental conditions prevailing on Kerguelen during the past 10,000 years were reconstructed. Comparisons were also made between depositional environment information determined by diatom studies and conclusions reached by Young and Schofield in a 1972 pollen analysis using soil samples from the same levels in the Kerguelen core.