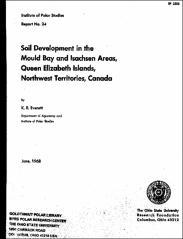 Institute of Polar Studies Report No. 24

Soils developed on the fine-grained sedimentary rocks of the Western Queen Elizabeth Islands illustrate well the weakening of the soil-forming processes with increasing latitude. Most of the soils of the Mould Bay area, Prince Patrick Island, are thin with weak morphological and chemical profiles. In contrast to the Tundra soils of northern Alaska and Victoria Island, the desertic soils of Prince Patrick Island are low in organic matter. They have developed largely under the processes of salinization and calcification. Their complex, mosaic associations reflect the dominant influence of subtle drainage changes. The soils of the Isachsen area of Ellef Ringnes Island are similar to those of Prince Patrick Island. However, profile development is even less well defined. The degree of expression of the soil-forming processes here has been reduced to almost nothing. The soils and soil-forming factors are expressed better on Prince Patrick Island, partly because of its more southerly latitude and somewhat more coarse-grained parent materials, and partly because the soil-forming factors there have had a greater uninterrupted period over which to operate.