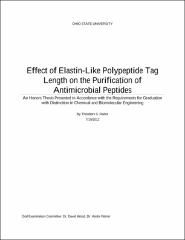 Due to the observed increase in antibiotic resistance of bacteria, there has been a search for new types of therapeutics to combat this phenomenon, which is presenting one of the greatest challenges to Global Health Programs. Antimicrobial peptides, small proteins with less than 100 amino acid residues, are one promising field of new candidate molecules for antimicrobials. One obstacle to their study is a reliable method of recombinant purification in E. coli. Higher yields of the peptides are necessary for their efficient large scale study. A fusion protein consisting of a self-cleaving intein and a precipitation tag known as Elastin-Like Peptide (ELP) is one possible purification scheme for increasing the yield of active antimicrobial peptide. Previous work in the lab of Dr. David Wood created a series of pET vectors containing ELP tags of reducing size length from 550 to 50 amino acids. Using a reduced tag size, it should theoretically be possible to increase the yield of peptide due to increased metabolic efficiency. In this study two peptides, Equine Defensin α-1 and Ctriporin, were introduced into the pET-E-I vector and expressed E. coli BLR. The protein was purified using the Inverse Transition Cycling (ITC) method and assessed for purity on Tricene-SDS 10-25% gradient precast gels. The activity of the peptides against S. equi and E. coli was tested using broth microdilution and radial diffusion tests. The peptides, when correctly purified, were not active against the bacteria in both tests. One possible reason for this inactivation is the use of ammonium sulfate as the salt in the ITC method instead of sodium chloride. In the future the peptides should be purified and tested while using sodium chloride as the precipitating salt for the ITC method.