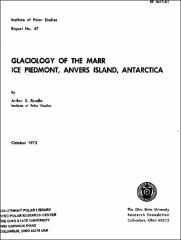 Institute of Polar Studies Report No. 47.

The results are presented of a comprehensive three-year study of the Marr Ice Piedmont, Anvers Island, Antarctica. The piedmont stands on a low coastal platform ranging from slightly below sea level to 200 m a.s.l. Ice thickness ranges from 60 to 80 m at the coastal cliffs to more than 600 m inland. Annual accumulation is high. There is a strong relationship between elevation and accumulation rates and a marked variation of accumulation rates from year to year. Surface ice velocities range from 14 to 218 m/year and there is considerable ice streaming as a result of the subglacial topography. The mass balance of a representative part of the piedmont is considered to be in equilibrium, or possibly slightly positive. A study of a peripheral ramp shows annual fluctuations of balance and it is hypothesized that there may be a long-term tendency toward a positive regime. Ice-core studies indicate that there is no dry snow facies but all other facies are identified. The saturation line lies at approximately 600 m a.s.l. and the equilibrium line ranges from 60 to 120 m a.s.l. Englacial ten-meter temperatures range from -0.8 °C near the coast to -4.9 °C inland. Deformation velocities have been calculated and basal sliding velocities inferred. It is hypothesized that basal conditions are not everywhere the same and that parts of the piedmont are frozen to bedrock. It is suggested that basal sliding and erosion are related and that the piedmont is selectively eroding its bed and accentuating the subglacial topography. Evidence of erosion--debris-rich ice—exists in the piedmont but is below sea level at the coastal cliff. The piedmont is not a "Strandflat Glacier" which is cutting a planed surface at a level controlled by the sea.