Geology of the Southern Appalachian Mountains 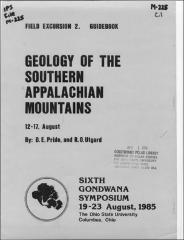 This guidebook was produced for participants of the Sixth Gondwana Symposium held at the Institute of Polar Studies in August 1985. This field trip, which was on August 12-17, 1985, covered about 1400 miles (2254 km). The field trip covered six physiographic provinces of the United States in Ohio, West Virginia, Kentucky and Tennessee. Considerable stratigraphic and structural variation is noted and they visited igneous, sedimentary, and metamorphic terranes. Rocks ranging in age from Precambrian through Permian, as well as Quaternary glacial deposits, were encountered. Although the primary objective was the general geology of the region, several of the stops focused on economic geology.