Reactions Between Pb2+ and (I-+I3) in Acidic Silica Gels 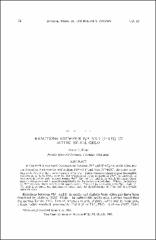 In this work it was found that reactions between Pb2+ and (I-+I3-) in acidic silica gels are limited to the formation of Pbl2 from Pb2++2 I- and from Pb2++2I J , the latter occurring with the coincident formation of I2 crystals. There was no evidence of pseudomorphic conversion of I2 to Pbl2, even by the presence of large excesses of Pb2+, in contrast to reactions in acidic gels between excess Hg2+, Ag+, or Tl+ and I2, in which instances these metal cations convert I2 pseudomorphically to the respective iodides. When a deficiency of Pb2+ existed, there was no zone separation of Pbl2 and I2, as occurs with Hgl2, Agl, or Til and I2 in metal-ion deficient systems, and the distributions of Pbl2 and I2 crystals were random.