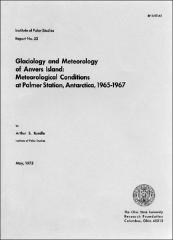 Institute of Polar Studies Report No. 53

This volume constitutes the final report on the surface meteorology-program conducted at Palmer Station by Ohio State University scientists between February 1, 1965, and December 31, 1967. It contains a breakdown and condensation of data previously published in two preliminary data reports (Rundle et al., 1968; Rundle and DeWitt, 1968) and of data made available by R.A. Honkala, who directed the field program in 1967. It also contains air temperature data from an ice station at approximately 300 m elevation on the Marr Ice Piedmont. It is essentially a data report.