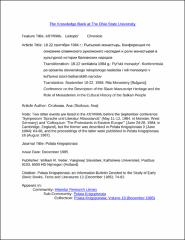 This feature "Chronicle" reports on recent events in the field of Early Slavic, e.g., celebrations, conferences, symposia, etc. The article describes the Second International Hilandar Conference, which was held at Rila Monastery in Bulgaria, September 18-22, 1984. Included here are brief descriptions of the 33 presentations which fell into four basic categories: 1) the theoretical and methodological problems of describing Slavic manuscripts, 2) the delineation, publication and interpretation of medieval texts, 3) the literary activity in monasteries and the ties between literary centers, and 4) Balkan monasteries: their role in the history and cultural development of the Balkans. At the end of the report it is stated that William R. Veder's invitation to hold the Third International Hilandar Conference in Nijmegen/Holland, September 1-3, 1987 was accepted. However, the Third International Hilandar Conference was actually held March 28-30, 1989 in Beograd, Jugoslavija. The proceedings of the Rila conference were published in "Kirilo-Metodievski studii" 3 (1986): 127-297.