The Edit Distance as a Measure of Perceived Rhythmic Similarity 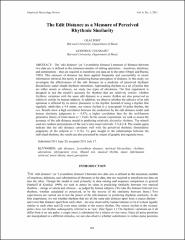 The ‘edit distance’ (or ‘Levenshtein distance’) measure of distance between two data sets is defined as the minimum number of editing operations – insertions, deletions, and substitutions – that are required to transform one data set to the other (Orpen and Huron, 1992). This measure of distance has been applied frequently and successfully in music information retrieval, but rarely in predicting human perception of distance. In this study, we investigate the effectiveness of the edit distance as a predictor of perceived rhythmic dissimilarity under simple rhythmic alterations. Approaching rhythms as a set of pulses that are either onsets or silences, we study two types of alterations. The first experiment is designed to test the model’s accuracy for rhythms that are relatively similar; whether rhythmic variations with the same edit distance to a source rhythm are also perceived as relatively similar by human subjects. In addition, we observe whether the salience of an edit operation is affected by its metric placement in the rhythm. Instead of using a rhythm that regularly subdivides a 4/4 meter, our source rhythm is a syncopated 16-pulse rhythm, the son. Results show a high correlation between the predictions by the edit distance model and human similarity judgments (r = 0.87); a higher correlation than for the well-known generative theory of tonal music (r = 0.64). In the second experiment, we seek to assess the accuracy of the edit distance model in predicting relatively dissimilar rhythms. The stimuli used are random permutations of the son’s inter-onset intervals: 3-3-4-2-4. The results again indicate that the edit distance correlates well with the perceived rhythmic dissimilarity judgments of the subjects (r = 0.76). To gain insight in the relationships between the individual rhythms, the results are also presented by means of graphic phylogenetic trees.